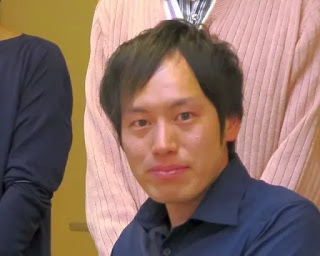 Last month, our electrical engineer, Mr. Y, moved to Arizona from Japan and started working at ISOWA America (IA). Mr. F will be completing his three-year term in IA, and Mr. Y will take over his position.

I am so glad that the IA team welcomes him. 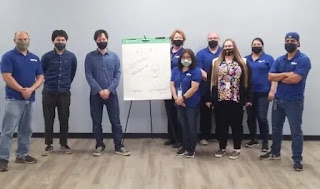 Please take a look at the board at the center. 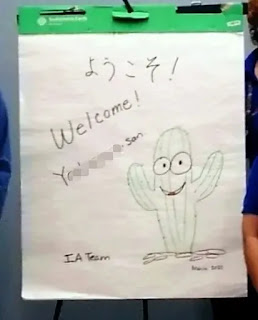 According to Mr. Y, he sees many people wearing masks in town. He feels safe because the shops like supermarkets are not so crowded.

Like the IJ engineers who were stationed at IA, I hope you will learn a lot and grow.

Posted by Hideyuki Isowa at 2:08 PM No comments:

What is a new way to utilize a “video”?

Now, gatherings are limited because of the COVID-19 pandemic.

So, we are looking for some ways to interact with each other by utilizing video.

As one of example, I’ll introduce the recent commendation of our employees who have worked for many years.

Usually we have given them such awards in a company-assembly.

However, this time, I called on them personally and presented their awards.

After that, we took a video as they shared some words and distributed the video throughout the office. 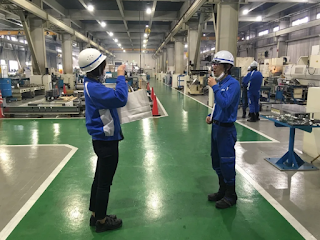 I was hoping to see other employees who had watched the video sending some messages of congratulation and gratitude to them.

There are 13 people who received awards. 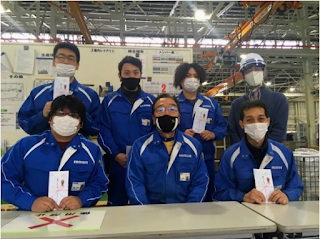 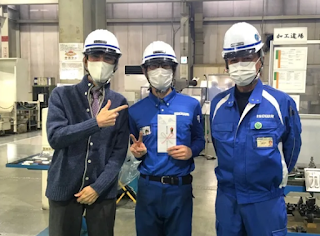 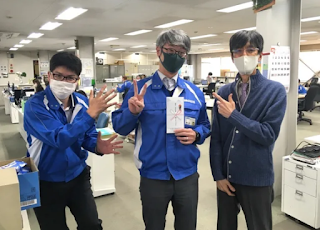 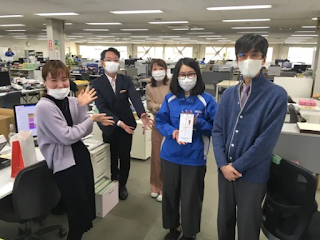 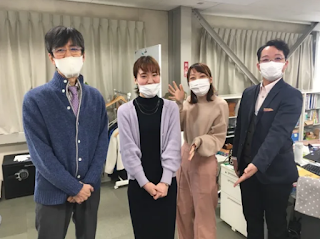 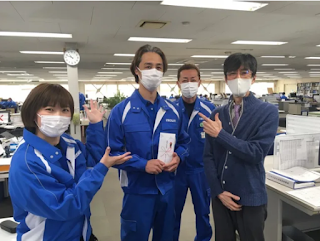 (In these pictures, there are other employees who rushed to celebrate with them.)

7 of them have been working for 20 years and the other 6 have worked for 10 years.

I felt deeply moved because of those who joined ISOWA 20 years ago when I had become president of my company.

Actually, the video received a lot of comments from other employees, for example, “I’m really happy to work with them.”

This is proof that they won our gratitude.

In spite of the COVID-19 pandemic, I felt emotional connections thanks of the video.

Posted by Hideyuki Isowa at 3:02 PM No comments: 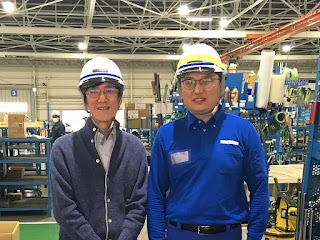 A new member (we call him “Mr.T” here) has joined ISOWA Japan! He is from Gansu, China which is between the Inner Mongolia Autonomous Region and the Xinjiang Uyghur Autonomous Region. According to Ms.K, who knows about China well, “The famous Dunhuang” is in Gansu, too.

Actually, he was supposed to join ISOWA in April 2020 with other new employees. However, because of COVID-19, the government prohibited entries into Japan from China, so he couldn’t come to Japan as scheduled.

Before that, he already resigned from his former job in Shanghai to join ISOWA, so he went back to his hometown and kept waiting for almost a year. It shows his strong feeling for ISOWA. Thank you for waiting such a long time Mr.T.

It was finally possible to enter Japan, and he planned to come in the middle of January. But since last Fall, COVID-19 was going around again, so he decided to come a week earlier. After arriving in Japan, he stayed in quarantine at a hotel for two weeks, and FINALLY, his new journey in ISOWA was started on the 20th of January!

Because of the COVID-19 influence, he couldn’t introduce himself to everyone face to face, so we took a video of his introduction, and released it to all members in ISOWA.

As soon as he started working, I went to Assembly Section where he is in training. This was our reunion since his job interview two years ago. I took a picture of Mr.K with some members who happened to be there in memory of his joining ISOWA. 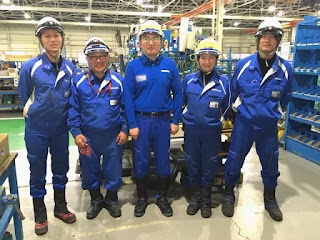 Welcome to Japan, and ISOWA Mr.T!

I can’t wait to see his growth, and we are sure that he is going to do his best for your business someday!

Posted by Hideyuki Isowa at 9:40 AM No comments: 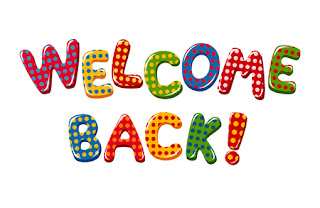 Happy new year, 2021!  I hope this year to be a great development and success for you.

We appreciate your continuous support for ISOWA this year!

While I was browsing a website, I saw an article about the translated Japanese subtitle, "Okaeri nasai" – a translated phrase from "Welcome Back!" used in an English movie scene.

"Okaerinasai" in Japanese is used in everyday situations to greet family members when they return home after being away from home that day.

The article explained that "Welcome Back!" in English has a nuance of "I am very glad to see you back" after a person returns from difficult situations or after a challenging task.

During the year-end and New Year holidays, as many as 150 ISOWA staff and TASUKE-bito (staff from partner companies) went to the customer's site for the machine installation projects. They all successfully completed their task and have returned safely.

Based on the article I read, it really is "Welcome Back!" But to me, it fits so much more to say "Okaerinasai" in Japanese to welcome them back.  It expresses my sincere appreciation.

So, for all members who worked hard, "Okaerinasai."

You all returned safely and in good health, even in this COVID-19 pandemic and cold weather.  I thank you all for returning safely.  Okaerinasai.

Posted by Hideyuki Isowa at 4:44 PM No comments:

Long-term Partnership Based on Mutual Trust 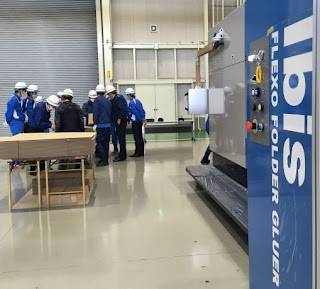 Our customer visited us for the final checkup of their Flexo Folder Gluer Ibis.

They were completely satisfied with the machine quality.

We are going to install the Ibis in their factory site at the end of this month.

27 years ago, we installed another machine on their site.

We were facing many big challenges and it took a long time before the startup.

However, they fully trusted our engineers even though we caused the troubles.

They admire our service technicians’ quickest repair efforts and rely on their constructive advice regarding machine maintenance intervals.

There is no doubt that they ordered a new machine because of our strong partnership over several decades.

We are certainly committed to the successful startup for the upcoming installation.

I truly appreciate all of your support this past year.

I wish you a wonderful holiday season. Stay safe and healthy.

Posted by Hideyuki Isowa at 11:04 AM No comments:

A new Isowa-bito (staff) is born

Today, I introduce a young man, Mr. N, who will join our company next year. 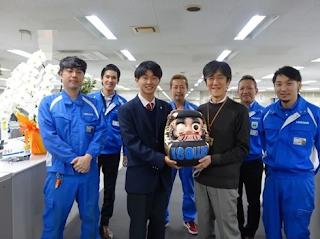 He will graduate from his high school next spring.

I asked him why he chose our company, not one of the other larger or more well-known companies.

He said, “My parents told me to join a major company, but I was very impressed by your corporate philosophy, “Creating a company with the best corporate culture in the world that makes us and our families happy.”

“This is the reason why I chose this company.”

“Also, I want to work for my family and teachers, because they  helped me become who I am today.”

“For example, I want to repay my parents and teachers for their support once I start working.  I want to take my parents on a hot-springs vacation and take my teachers out for a nice meal.”

I was impressed by each word!!

We have many employees like him who have sympathized with our philosophy and have worked in our company for many years since they graduated from high school.

Mr. Y, whom I introduced before, was one of them.

He was actively involved in our company’s front lines for more than 50 years!!

We promise to support Mr. N so that he will work for a long time and be actively involved in front lines like them.

Nice to meet you Mr. N! Let’s do our best together!!

Posted by Hideyuki Isowa at 10:39 AM No comments:

Further Step Up of Remote Installation

In September, we had another installation overseas, but because of the Covid-19 pandemic, we were still in a difficult situation to send people from Japan to America. As a result, we had to complete the installation with remote support like we shared with everyone before.

This time, the special type of machine made the installation more difficult, but all members in Japan and America cooperated and tried to do their best.

Because of everyone’s effort, all the installation work was completed, and the machine is running without any troubles. 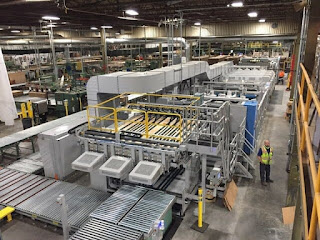 This success is thanks to many background efforts of members.

In Japan, some members came to the office in the early morning to give ISOWA America members directions via skype, and some members made an installation manual for the team to use on site.

Also, a member of the general affairs department made a video summary from assembly to disassembly of our machine for reference by the installation team. The efforts were important as this was the first machine for this customer, and before we could even install the first machine, they had already ordered another!

After this installation, ISOWA America members sent us a picture.

Their smiles show their satisfaction and how our remote installation support worked well! 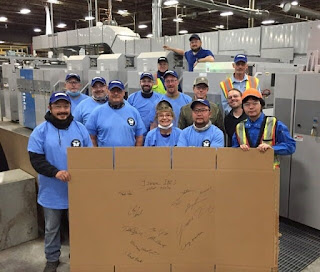 Every time I see such pictures, I’m sure that we could steadily build a relationship of trust and even if we are geographically far apart, we can give good services for overseas’ customers.

The Covid-19, changed a lot of things. At first glance, it leads us to think in a negative way, but it could also be said that it gave us a new vision and a new way of thinking.

Nobody knows how the Covid-19 will turn out, but be assured that we will keep thinking the best way to support you, and doing our best for your business from now on.

Posted by Hideyuki Isowa at 11:27 AM No comments: